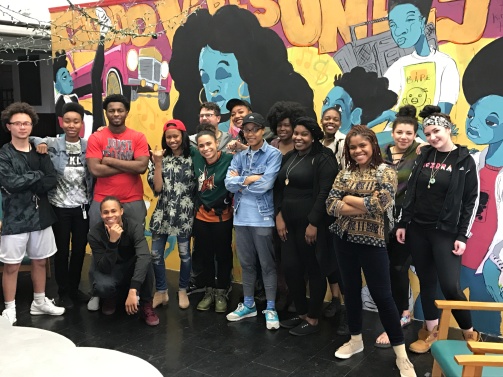 My job as a full-time activist at the IMC has been a reminder that we must not only work for our own freedom, but that we must empower others to find their own vision of liberation. I have seen other activist friends burn out, become famous, have babies, face emotional breakdowns, and overcome health crises. When we falter, are there others to help carry the load? How do we pave a path for others to tread? How do we get there together? How do we build our own collective power?

I have been inspired by the youth who have been a part of Open Scene, an NEA-funded series of four workshops held the IMC to build the next generation of artists in Urbana-Champaign. It’s being coordinated by my amazing co-worker Blair Ebony Smith. One of the highlights was a weekend with the hip hop group Mother Nature, who took the above photo with our participants. We’ve seen several fruitful collaborations come out of this project, including a “Self Love” open mic with Uni High graduate Madie Gardner. We’re also starting a new music studio with Jamie Gatson, a friend Kiwane Carrington who in 2009 was killed by Champaign police. One of our other workshop leaders, Derek Linzy, who played with Prince, has rented a room at the IMC to teach music classes.

I have also been working to support Joe Dole, a writer incarcerated in Stateville prison, through creating a Facebook page and publishing his articles in Truthout. Morey Williams invited Joe to read a paper over the telephone for a conference at Villanova University where she teaches. A version of the article, “A Plea From Inside: Prisons Must Offer College Classes” was just published in Truthout. There’s a growing group of people, that also includes Shari Stone-Mediatore, a professor at Ohio Wesleyan University, and Dina Molito, of Minutes Before Six, who are working together to give greater visibility to Joe’s dispatches from beyond prison walls.

A report I co-authored, “We Are the Color of Freedom: Reflections from Resisting Mass Surveillance in the Trump Era,” has been released from a summit I attended at Georgetown University in Washington D.C.. It captures the cutting-edge of grassroots activists working at the intersection of digital surveillance and racial justice. You can read about the summit in the Washington Post.

I also published in The Public i an investigation into the police killing last year of Richie Turner, a homeless man who was a familiar site in Campustown, after corresponding with his sister Chandra Turner who is outraged by his death.

It’s looking like I’ll pass my second bill in two years this summer. HB 2738: Protect Prison Visits Bill has been approved by the Illinois legislature and is headed to the Governor for a signature. If passed, it would be the most comprehensive bill to date regulating video visitation, the increasingly widespread practice of replacing jail and prison visits with Skype-style video screens.

On a more personal note, I’ll be in Chicago this coming weekend for the Printer’s Row Lit Fest. I’ll be signing copies of my book The Negro in Illinois: The WPA Papers at the University of Illinois Press tent at 3:30 p.m. on Saturday, June 10, 2017. [You can read more about my book in an article that appeared in the Chicago Tribune.] Come buy a copy and have it signed!

Thanks to my friends and comrades who have helped me make this move to full-time activist!